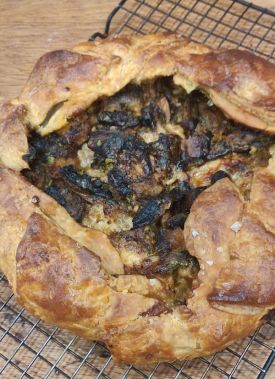 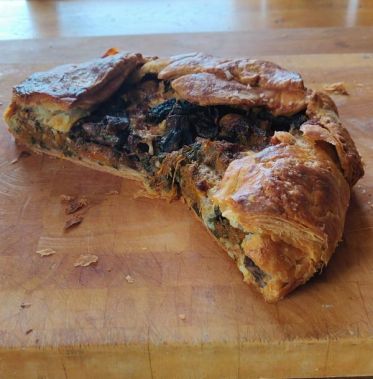 Italian torte salate, savoury pies, are popular, every day dishes for home cooking. They are endlessly versatile, inexpensive to make and, above all, taste great. A crust of short or puff pastry, some cooked vegetables, a little ham or other Italian cured meat (mortadella, speck) for extra flavour if you choose, eggs or béchamel sauce or ricotta to bind: this is all you need for a lovely meal.

In Italy, the now ubiquitous ready-made and ready-rolled short pastry and puff pastry make torte salatemore popular than ever. I do not think much of shop-bought pastry and I have rarely used it: I have tried all-butter chilled puff pastry and found it acceptable, just. I do not buy ready made pastry: to make short pastry is so simple and whilst traditional puff pastry IS undeniably a labour of love, one can make a speedy cheat’s version.

Lately I have been experimenting with the inspired combination of pumpkin and mushrooms as a filling for torte salate and the results have been excellent. I started off by making a recipe published by Rachel Roddy in December last year; then I played around with that idea, substituting ingredients and tweaking some steps, and ultimately I have developed this one. Each experiment and variation has been very good.

The pastry here is an odd one, a favourite of Italian food bloggers in the last ten years: it is a flaky “cheat’s” puff pastry, made with cream cheese, butter and flour. It is delicious and far less demanding than traditional puff pastry. You can either make it and use it straight or, as I did, you can make it, rest it and then give it a double fold, as in traditional puff pastry – this delivers extra flakiness. The filling is a combination of roasted pumpkin and fried mushrooms, plus some gorgonzola cheese, which brings in a welcome piquancy. There are some spices too – nutmeg, cinnamon, black pepper – and a few crushed amarettibiscuits, just enough to introduce an elusive sweetness.

I prefer to make the pastry the day before because it is better if it is cold and relaxed before rolling it. The filling can be made either the day before you want to bake the pie or on the same day. The torta salata is at its best barely warm, at room temperature. It survives well and can be reheated.

800 g approximately (net weight) of butternut squash, roasted in slices in the oven until caramelized and then cubed
700 g approximately Portobello mushrooms, peeled and cut up in thick slices
3-4 tablespoons of chopped parsley
2 cloves of garlic, finely chopped
grated parmigiano reggiano
100 g gorgonzola (or other blue cheese)
3 dry amaretti, pulverized
3 or 4 tablespoons of dry, unflavoured breadcrumbs
a pinch each of cinnamon and nutmeg
plenty of black pepper
half a teaspoon of grated lemon zest
to glaze the pie: egg wash (1 yolk mixed with one teaspoon of water) or milk

To make the pastry, mix the flour, salt and butter. Coat the butter cubes in flour and then squeeze every single one between your fingertips in order to get long, thin flakes, breaking up some into smaller ones at the same time. Add the cream cheese by the teaspoon. Mix with a fork first and when the pastry starts combining into bigger clumps, transfer it onto a floured surface and use your hands to finish off the job: you want to create a cohesive mass with many flakes of butter still visible. Pat the dough into a brick shape, wrap it with clingfilm and refrigerate until the butter has solidified again.

For the filling: place the mushrooms in a roomy, non-stick frying pan, on medium high, without salt or oil. Cook them, stirring occasionally, until the water they release has evaporated: how much water will depend on the mushrooms. You are aiming at mushrooms that have lost their sponginess and have greatly reduced in size. Drizzle with oil and let them fry and take colour. When they are golden, add the parsley and garlic. Cook for a minute or so, then add salt and the butternut squash. Give everything a good stir, cook for about five minutes, add a generous shower of grated parmigiano and the spices. Switch off and taste: more salt? More spices? Maybe a little sherry vinegar to lift the tone? The flavour should be bold and peppery. Let the filling go completely cold.

When you want to assemble and bake the pie, take out the pastry from the fridge and rest it on the counter for about fifteen minutes, to soften a little. Pass the rolling pin over it (still wrapped in clingfilm) a few times, giving the “parcel” 45 degree turns and complete a full 360 degree turn. Remove the pastry from the clingfilm, lightly flour both sides, roll it out in between two sheets of parchment paper into a long and narrow rectangle and give it a double fold.
Refrigerate it for one hour, well wrapped, and then roll it out again into a large rectangle approximately 35 cm x 40 cm.  When I do this final rolling, always in between two sheets of parchment paper, I lift the top piece of parchment from time to time to check the pastry is not sticking and I lightly flour it. I then turn the pastry “packet” upside down, so that what was once the bottom becomes the top. I then lift the (now) top piece of parchment and I lightly flour the pastry again. In other words, throughout the rolling, you must make sure the pastry is not sticking – choose a method that works for you. Put the pastry back in the fridge, covered (a kitchen cloth is fine).

Heat the oven to 220 C static, medium rack. If you have a pizza stone, use it, otherwise insert a large, upturned baking sheet on the rack – you will bake the pie on it (in this case, you will have to lower the rack to the bottom third of your oven, so that the pie will be baking at medium height in the oven).
Remove the pastry from the fridge, mix the amaretti with the breadcrumbs and the lemon zest and spread them on the rectangle of pastry in a round, leaving a clean edge of about 5-7 cm from the sides (think of the Japanese flag to get the idea) – no need to be super precise.
Pile the filling of vegetables onto this bed of crumbs, scatter pieces of gorgonzola all over, pushing some deep into the vegetables.
Make eight slits in the pastry: one from each of the four corners and then one from the middle of each of the sides down towards the filling. This will give you eight flaps of pastry: fold them onto the pie, each one slightly overlapping the next, to create a tight seal.

Tidy up the pie with the sides of your palms giving it a round shape. Brush the pie with egg wash, sprinkle a little parmesan all over, dot the exposed area of the filling with butter. Lift the parchment with the pie onto a pizza stone or onto an upturned baking sheet, trim the paper close to the pie and transfer it to the oven.
Bake it for one hour, turn down the oven to 180 C and cook for a further 15 minutes approximately, covered with foil.
Remove from the oven and cool on a rack.

If you do not want to do the double fold, simply roll the cold pastry into a large circle of approximately 35-40 cm diameter and proceed with the recipe, adding the filling, cutting the slits etc.
You can of course also use a brisée pastry or a simple short crust pastry.