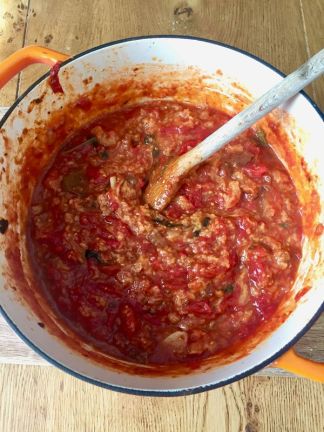 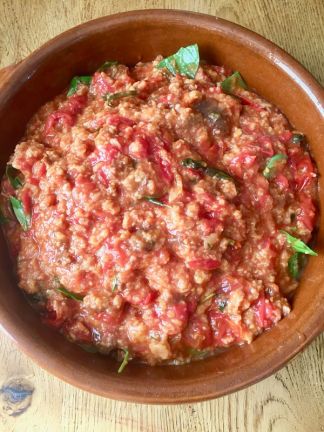 One of the best, easiest summer soups, to be eaten tepid or at room temperature (or even slightly chilled, for me), pappa al pomodoro is a thick tomato and bread soup, strongly associated with the cooking of Tuscany. On a hot day, few other dishes bring more comfort.
In Italian, the word pappa is commonly used to mean “baby food”, something soft and unchallenging and pappa al pomodoro is exactly that, with the major difference of its taste, intensely tomatoey and rich.
It is no more than tomatoes (either canned or fresh), stale bread, water and basil, but the result is much more than its components. By the end, the bread is almost no more discernible and the whole looks like a red-brown mess, with specks of green, the taste is ethereal though, the texture creamy and soothing.
I have seen recipes where a light meat broth is used and I think they miss the point: pappa al pomodoro is supposed to be a light, rather quick, cheap and unassuming dish. A sturdy loaf of  bread of impeccable pedigree makes the difference though: traditional recipes call the bread to be only stale, but I had much better results using bone-dry bits and pieces – they hold up the prolonged cooking without turning into an awful glue.
I much prefer a pappa al pomodoro that is heavy on tomatoes and lighter on bread and for my version I used sweet cherry tomatoes, a touch of garlic, lots of basil. Generally, no Parmesan is served with pappa al pomodoro, but each portion should be generously drizzled with oil.

Fry the garlic in a glug of olive oil, without letting it getting too coloured.
Add the tomatoes, basil, salt and sugar.
Simmer for 30 minutes.
Add the bread and 1.5 lt of water, you can add more water later on if the soup become to thick.. Bring to simmer and cook for about 1 hour, stirring often and whisking with a whisk, to mash up and disintegrate the bread. Check for salt halfway through and then again at the end.
Let it sit until tepid, add more basil and serve, drizzling each portion with extra virgin olive oil.