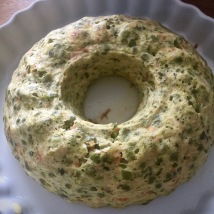 This is a lovely old-fashioned dish worth reviving. Think of a sformato (singular ) as the Italian, more substantial version of a soufflé. Generally, sformati (plural) are made with chopped-up cooked vegetables, eggs (yolks and whites separated, the whites beaten to stiff peaks) and Parmigiano, all bound with a thick béchamel sauce. A sformato is generally cooked in a bain marie and then unmoulded – being cooked in a mould being the peculiarity of this sturdy and yet creamy soufflé-like dish (the noun sformato comes from the verb “sformare“, which means “to un-mould”).  Even if savoury sformati are more common (with peas, spinach, broccoli, fennel or artichokes, for instance) they can also be sweet  (with, for example, ricotta and almonds). Sformati are disappearing dishes: once popular on the tables of Italian well-to-do middle classes (they do look quite grand),  they have now almost been relegated to memory, which is unfortunate because they are delicious, impressive and easy to prepare. Not as fragile or temperamental as a souffè, a sformato can even be made in advance and then succesfully reheated,  bathed in a light sauce, in the way I am suggesting here.

I use  frozen peas because they are generally better than the fresh ones I can buy from shops.
Ideally you want to cook the sformato in a non-stick kugelhupf or bundt pan of approximately 2 lt capacity, well buttered; you can also use a souffè dish or individual ramekins, of course. Lacking all this, the sformato can be cooked in a sturdy oven dish and then served without unmoulding it, gratin-style.
You will also need a large pot or deep oven tray that can accommodate the mould; I use a gigantic le Creuset casserole.

Pour some boiling water over the peas,  leave them for ten minutes to defrost and drain.
Cover the bottom of a  large frying pan with a film of water, add the chopped vegetables, salt them and cook them, on low and covered, until fully tender. The vegetables must not take any colour. Uncover, raise the heat, add the oil and stir well so that the soffritto (the mix of chopped carrots, celery and onion) is coated in fat. Add the peas, the vermouth, the sugar and cook for 5 minutes, stirring often. Cooking the vegetables in a little water first avoids using too much fat, which would mask their subtle flavour. This is a technique I now often employ and that I have come to appreciate a lot.

Coarsely chop half of the peas in a food processor. Mix both chopped and whole peas.
Preheat the oven to 180º C/356º F (convection).
Now make the béchamel sauce. Melt the butter, add the flour and mix well to form a paste. Cook on the gentlest heat for 10 minutes, stirring often. Remove from the heat and add the milk gradually, whisking like mad to avoid lumps. Return the sauce to the stove, bring to the boil and simmer for 5 minutes. Season it with salt, pepper and nutmeg. Fold it into the peas and cool down completely.
Add the yolks and the Parmesan and mix thoroughly.
Whip up the whites to hard peaks and fold them into the pea and béchamel base – I use my hands.
Pour the mixture into the buttered tin, gently tap it onto the table, transfer it into the larger baking dish and place it in the oven, medium rack. Only now fill the baking dish with hot (not boiling water),  up to three-quarters of the mould.

Cook it for approximately 45 minutes, until well risen, firm to the touch and light golden. Remove the mould from the water bath, place it on a rack and cool it for 10 minutes. Place an oiled dish than can go into the oven over it, turn the whole thing upside down to release the sformato. Gingerly lift the mould. The sformato should now be proudly sitting in the middle of the dish. If this is not the case and it is too dangerously close to the edge of the dish, do not worry: when it has cooled down a little, you will be able to push it towards the centre, In the unfortunate event that you broke the sformato when trying to ummould it, just patch it back as much as you can when it is cool and proceed with the recipe. If you butter the mould very well, this will not happen.

The sformato can now be held at room temperature for a few hours.

When you are ready to serve it, bring the oven to 200º C/400º F.
Make a quick tomato sauce by cooking the tomatoes and butter for 5 minutes on high heat: it need not be too thick as it will cook further in the oven. Check for salt.
Coat the sformato with some of this sauce, dust it with some grated Parmesan and add some flakes of butter here and there. Bake for about 15-20  minutes. Meanwhile finish cooking the remaining sauce for a further 5-10 minutes, adding some basil or thyme at the end.
Remove it from the oven, let it settle down for 5 minutes and serve it, passing the tomato sauce around.

Notes:
This recipe can be used as a template for other sformati, using other vegetables: courgettes and spinach being the most suitable. It is a well behaved recipe and once you understand the logic, you can come up with your variations. You must have some cooked and flavoursome vegetables, some rather thick béchamel sauce, a few eggs and a handful of cheese: a little more or less of any of these ingredients, will not make a great difference.

For a courgette sformato: I would dice the courgette small, salt them and leave to degorge. After rinsing them and patting them dry, I would cook them in butter and mix them with the eggs, cheese and béchamel sauce and proceed with the recipe.

As for a spinach sformato, I would cook the spinach, squeeze and then dry them in  butter. I would mix them with the béchamel, eggs and cheese etc.

My blog in Italian is: www.qbbq.wordpress.com My English blog is: www.italianhomecooking.co.uk View all posts by stefano arturi