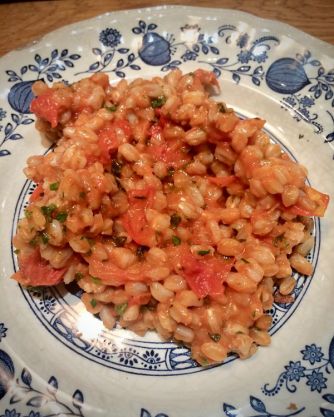 A simple and tasty recipe from Puglia, the heel of Italy: wheat berries boiled till al dente and then simmered in a cherry tomato sauce, with garlic, chilly pepper and parsley. Straightforward and delicious. I prefer using semi-polished berries here, the ones that have had the outer, inedible husk removed but with some of the bran still attached. I also tried cooking with whole grain berries in the past I have always found them boring and far too chewy. If you soak the berries the night before, the cooking time will be very short indeed.

Boil the berries in salted water until they are soft but still with some bite.
Let them steep in their liquid for about 30 minutes and drain, retaining some of their liquid.
Fry the garlic and chilly pepper in a generous glug of olive oil. When the garlic is lightly golden raise the heat and add two tablespoons of parsley.
Add the cherry tomatoes, salt them and let them cook on a brisk heat for about 20 minutes: you are aiming at a well- reduced and flavoursome sauce.
Add the wheat berries and let them simmer in the tomato sauce for about 20-30 minutes, adding some of the reserved cooking liquid if the dish risks becoming too thick. Bear in mind that this dish is not supposed to bee soupy though.
Let it rest, covered, for a good 10-15 minutes. add the remaining parsley, drizzle with olive oil and serve. Add some slivers of Pecorino or dollops of ricotta for a richer dish.