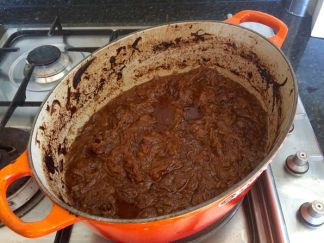 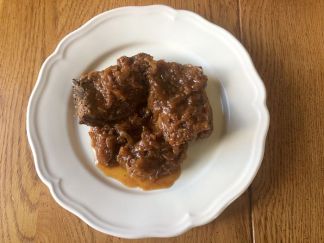 “La genovese” literally means “The woman/girl from Genoa”. It is in fact a meat dish from  Naples and it has nothing to do with Genova, the capital of Liguria, in North-West Italy. Rather confusing, I agree.

A solid piece of beef is braised for hours in a huge quantity of onions – this is la genovese in a nutshell.  When you taste, smell and savor it, you realize that there is more, much more going on here. A miraculous exchange between the meat and the onions and the magic of slow-cooking transform a rather basic dish into something truly sumptuous; the meat emerges spoon tender and extremely flavorsome and the onions turn into a robust, mahogany dark, glossy, unctuous irresistible, thick sauce. Economically and intelligently, the Neapolitans use some of the sauce to dress pasta  (ziti spezzati, generally), and the meat is then served as a secondo, with a little of the precious sauce spooned over.

The origins of ‘a ggenuvese (la genovese in Neapolitan dialect) are still unclear, as well as those of its peculiare name – there are few theories around, but no one with a solid historic explanation. According to Jeanne Carola Francesconi, the author of La Cucina Napoletana (1965),  the indisputable reference book about Neapolitan cooking,  la genovese, as we know it now, goes back to the end of 19th century. In simpler forms, it is older. Until further evidence is found, this may well remain an unresolved mystery.
What is certain however, is that la genovese is a beloved dish, well rooted in Neapolitan culture and sensibility, still enjoyed in contemporary Neapolitan cooking.
There are very many versions of this dish as there are families, of course. I decided to take the one described by Jeanne Carola Francesconi as a mole, but please reads my notes at the end, because I have made few, important changes.

Bring the meat back to room temperature: this will take few hours.
Brown it all over in a little olive oil: the heat must be medium-low and patience is the key word here. If you hurry up the process, you will end up with a burnt exterior, rather than the appetizing, caramelized one you are aiming at: “burnt” taste bitter, “caramelized” tastes sweet.
Remove the meat and deglaze the pan with the vermouth-tomato mix. Let it bubble, scraping all the tasty bits that may have stuck to the pan and switch off.

Place the onions, the chopped vegetables, the chopped pancetta mix, the anchovy fillets, the bay leaf and few tablespoons of water in a roomy, non-stick saucepan, salt them lightly, cover  and cook for about half an hour or so, stirring occasionally, at a gentle heat. Note that there is no fat involved at this stage: the steam produced inside the pot will be enough to soften the vegetables, without them sticking. Add few tablespoons of hot water during the cooking if  you realize the whole lot is getting too dry.When the onions have greatly reduced in bulk, uncover, add a couple of tablespoons of olive oil and cook them for a further ten-fifteen minutes. At this stage, the onions will not of course be caramelized and they will look not too inviting to be honest: that’s ok.

Transfer half the onions to a heavy pot where the meat can fit snugly (a Le Creuset type), add the meat (alongside any juice it has shed), the vermouth, the mazzetto odoroso and the rest of the onions.
Cover the pot, leaving a gap: I tend to place the lid lightly askew and this allows for some useful evaporation.
Place the pot in a 100° C preheated oven and cook for a couple of hours. Raise the heat to 120° C and keep on cooking….well, cook until the meat is so tender it offers no resistance whatsoever to a skewer. This has generally taken at least 10-12 hours in my oven, but I have also cooked this dish for longer. During this time, I occasionally turn some of the onions over to redistribute the heath. Do check how the meat is progressing every hour or so.
When the meat is done, the onions will not still be ready though. Remove the meat, spoon same sauce over it  and cover it with some foil. Crank up the oven to 180°  C and cook the onions until they are greatly reduced and look a deep mahogany, oily, inviting mess. Check for salt, pepper (I find it needs a lot) and gradually add the sherry vinegar: its sharpness cuts through the sweet richness of the dish and it greatly improves it. Go slowly though, adding one teaspoon at a time: you do not want vinegary onions!
Place the meat back in the pot, turn it few times in the sauce and let it cool completely in the sauce- it will re-assorb some of its lost juices.

Refrigerate it for 12 hours, at least: in any braise/stew, the resting time is as important as the cooking time. Flavors mingle, they get to know each other and became best of friends, i.e. do not skip the resting time – the flavor is really amplified because of it.
When ready to eat, remove the meat from the sauce and slice it. Reheat the sauce first and when it is bubbling, add the meat and reheat it gently.
Cook some ziti spezzati  pasta or some maccheroni in you want to follow Italian traditions and dress them with some sauce, a shower of grated pecorino, a little chopped parsley; the meat can be eaten as a secondo, with some of its oniony sauce. This dish keeps egregiously in the fridge for few days, I think it gets actually better. Should you get bored of it (God forbid!), choe the meat with a mezzaluna and use it to stuff some ravioli.
This is it, a real tour de force, but spectacular.

Notes:
As I said, this is MY version of la genovese, devised after signora Francesconi’s one. Where do they differ? I tried her genovese a couple of times and I have always found it delicious but too rich in fat. Even in her last revised and leaner version (1995), she calls for: 1 kg meat (with no bone), 225 g fat (oil, butter and  lard), 100 g chopped mixed salame+prosciutto, 1.250 g onions. With the beautifully marbled Jersey meat I use, I found her amount of fat, far too much.

The meat: signora Francesconi calls for a prime cut of annecchia, which is an old, neapolitan word for vitellone, a young cow slaughetered when she is about one year old.  This was of course, and still is, a prime, expensive cut, reflecting partly Mrs Francesconi’s wealthy background and partly, I guess, her taste. In other versions, I have seen that lesser cuts (from adult bovines) are called for: this is my preference too, because I find these deep, beefy flavors more satisfying. The cooking times vary of course according to the cut  one has chosen.

Cooking temperatures: I braise and stew any meat in the oven, which is very Un-Italian, I admit: Italian stracotti e spezzatini (braises and stews )  are generally cooked on top of the stove, but I think the oven gives more reliable results. I also set my oven at a much lower temperature than what suggested by most books/blogs ecc, following Harold McGee’s advice: he recommends a range between 93 C  and 120 C (if you are interested, check what he says here, at pag 163).

Honoring Carol Field: There is a very good version of la genovese in Carol Field’s In Nonna’s Kitchen (1997): as for meat, she recommends the point of the rump or the bottom round. I mention here Mrs Fields to honor her: she passed away few days ago. Great food writer, impeccable taste, essential books.