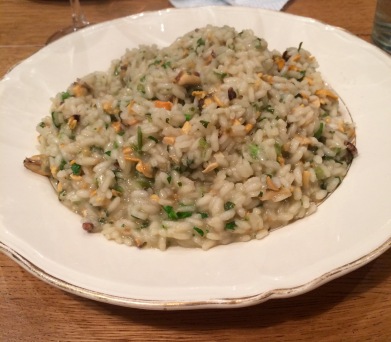 This is a risotto from Veneto, North-east Italy, a region that offers a magnificent but restrained fish and seafood cuisine, well exemplified by this sober, briny risotto with mussels – Peoci is local dialect for mussels, cozze in Italian.  If you happen to spend a few days in Venice, the capital of Veneto, do check the Rialto fish market,  which is a cornucopia of marine life and whose charm made Elizabeth David write one of most celebrated pieces of food writing in English. It is as magical now as it was sixty years ago.Mussels are great food: tasty, nutritious, cheap, plentiful, sustainable, easy and quick to cook. These days they even come already cleaned – a joy to cook with. This risotto is cooked with the liquid shed by the mussels and with a light broth which is made by boiling the emptied mussel shells with some water  – an ingenious and effective old, housewife’s trick. This lovely risotto is one of the easiest seafood primi (first courses) that can be very successfully replicated here in the UK.

On cooking mussels: the pan must not be overcrowded and the mussels should not be piled too high. In a roomy pan, put the vermouth, 200 ml water, whole garlic clove, bay leaf, parsley sprigs and peppercorns. Cover and bring to the boil. Let it cook for five minutes.

Drop in all the mussels and put the lid back on. The heat is brisk. Check after a couple of minutes and remove the mussels as they open, transferring them into a colander placed into a large bowl. I have rarely encountered  stubborn mussels that will not open when subjected to heat: in five-eight minutes most mussels will open.

When the mussels are cool enough to handle, remove the flesh from the shells and chop coarsely; if you want, you can  keep some of the mussels intact in their shell, for visual appeal. Do not throw away the  emptied shells. Filter the water in which the mussels and aromatics were cooked through a muslin and keep aside.

Place the shells in a saucepan, adding one litre of water. Bring to the boil and simmer covered for 15-20 minutes. Drain through a muslin-lined colander: now you have a very tasty and easy mussel broth. Keep aside, separate from the filtered mussel water.

To cook the risotto you will need a straight-sided tallish pot. Add one tablespoon of oil and when hot add the rice and toast it on medium heat for 2-5 minutes, stirring often: the grains will lose their raw appearance and become almost transparent. Remove the rice, wipe the pan clean and add the rest of the oil, the chopped onion and garlic. When the onion is very soft and thoroughly cooked,  raise the heat, add half of the chopped parsley and the rice. Stir well to coat the rice in this flavorsome mixture. Reheat the mussel water and add it to the risotto.
Risotto must be cooked on a brisk heat, it must be vigorously and often stirred. It is a myth that risotto must be constantly stirred: frequent stirring is enough. You can now start adding the hot mussels broth, one ladle at a time Check for salt half way through. If towards the end the mussel broth is not enough, just use plain boiling water.
A few minutes before the rice is done, add the mussels. At the end, the risotto should be rather loose but not soupy.
Off the heat, add the butter, the remaining chopped parsley, Parmesan if using. Stir enthusiastically, cover and let it rest for five minutes. Stir again and serve on hot, shallow plates.

Notes:
On mussels, see shopping, cleaning, storing mussels. The advice is consistent with what all my fishmongers have told me over the years, in Italy and here in the UK. I place them in a bowl, cover them with a damp cloth and keep them at the bottom of the fridge, trying not to open the door too often, to keep them as cold as possible. Sometimes I cook the mussels, shell them in advance and store them in their filtered liquid for a couple of days, in the refrigerator.
More on farmed mussels from Hugh Fearnely Whittingstall.
Sustainability: it is worth checking if the mussels have the Marine Conservation Society logo of approval, like the ones for sale at Waitrose

Parmesan and fish: it is a myth that Italian fish dishes, pasta and rice in particular, do not want Parmesan. A very light sprinkling of Parmesan does enhance some fish dishes, strong tasting fish/seafood in particular: mussels, mackerel, anchovies, salt cod, for instance.

In Veneto they tend to prefer their risottos rather loose and wavy, all onda (more than what is shown in my photos), but it is really up to you.

Mussel risotto with tomatoes: you could add a handful of room temperature quartered cherry tomatoes when you add the mussels towards the end of cooking. The whole point is that the tomatoes should not lose their bite.

Brothy mussel soup: if you do not want to cook the risotto, you could make a lovely and quick mussel broth. Cook and shell the mussels as described. Make the mussel broth as described. Fry the onion and when it is fully cooked, add the parsley. Add the mussel water and mussel broth. Bring to boil. Add the chopped mussels and reheat them. Spoon over toasted bread rubbed with garlic, drizzle with olive oil  and shower with more chopped parsley.

Pasta with mussels: proceed as in the above soup, adding 120g-180g small ditalini pasta when you bring the liquid to the boil: when it is almost done, add the chopped mussels, switch the heat off and let the pasta finish cooking in the residual heating, covered. Ladle into soup plates, drizzle with olive oil and sprinkle with more chopped parsley.