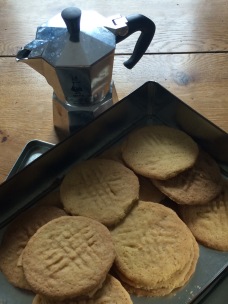 One can find biscuits made with corn (maize or polenta) flour in many parts of Northern Italy. They can be plain or with sultanas, are always rather buttery, and are most often flavoured with vanilla, lemon or orange. Sometimes they’re crisp and short, sometimes softer and more cakey.
I particularly like this version: not too rich, sweet but with a salty bite, super crisp and with that lovely crunchiness of polenta flour.  I have them for breakfast with my espresso and in the afternoon with tea, but they also go very well with fruit compote and  ice cream.

A very finely ground maize flour is generally used in Italy: it is called fioretto but I have found it here in London only rarely. My solution is to use normal polenta flour and grind it in a coffee-grinder. The pastry is a doddle,  even for people who do not feel comfortable in that department (no cold hand handling issues here). The butter is melted and poured onto the other ingredients and everything is mixed with a spoon.
I pushed the salt a lot here but that is really my taste and do feel free to make them less salty.

To bake these biscuits, you will need one special ingredient – baker’s ammonia. It is an old-fashioned, totally safe leavening agent, particularly suitable for biscuits – it bakes them to just the right light, crisp finish. If you shop around, you’ll find it easily enough – just search for baker’s ammonia/baking ammonia/ammonium carbonate/ Hirschhornsalz/Hjorthornssalt. It smells during baking, but this smell dissipates by the time the biscuits are done and there is no trace of it in the  final product. Do not stand in front of the oven when you check the biscuits  or you will inhale the unpleasant smell and your eyes might sting a little.
These lovely biscuits keep for ages in a tin box.

Melt the water, butter, sugar and salt. Add the vanilla and lemon zest. Let it cool down.

Mix the flours with the baking ammonia. Pour the water mix over the flour and mix with a wooden spoon. The dough will be soft. When everything looks well incorporated, transfer the dough onto a piece of cling film, wrap it up and put it in the fridge for 30 minutes.

Remove the dough from the fridge at least 30 minutes before, tap it with the rolling pin and knead it gently until it becomes pliable. Roll it out onto parchment paper or in between two sheets of parchment paper, no thicker than a pound coin. To stamp them out I use an ordinary wine tumbler 7cm/3 inch diameter or a ravioli cutter. I sometimes press a fork onto the biscuits in a criss-cross pattern because I like the look of it. The bits left over can be gathered, kneaded and rolled out again.

Place the biscuits onto two parchment paper lined baking trays, spacing them apart because they will spread in the oven. If you have just one baking tray, bake in two batches, keeping the unbaked biscuits on the counter.

Bake in a pre-heated 180° C/356° F oven until deep golden around the edges, swapping trays halfway through. The time really depends on the  size and thickness of your biscuits, from 20 to 30 minutes approximately. I check every five minutes after the first ten. Cool for five minutes and transfer them onto a rack. They will keep for ages in a tin.

Notes
A couple of these biscuits with some coffee/chocolate/vanilla ice cream sandwiched in between make a splendid sweet treat.

Polenta flour: I know that Indian shops (and some supermarkets) sell fine and medium maize/corn flour, but I have never used it.

Baking ammonia is a useful ingredient to have in your cupboard because it does make the best biscuits; and should you go to Italy soon, pop in any decent supermarket and get a few sachets: it’s sold in the baking section under the name ammoniaca per dolci.