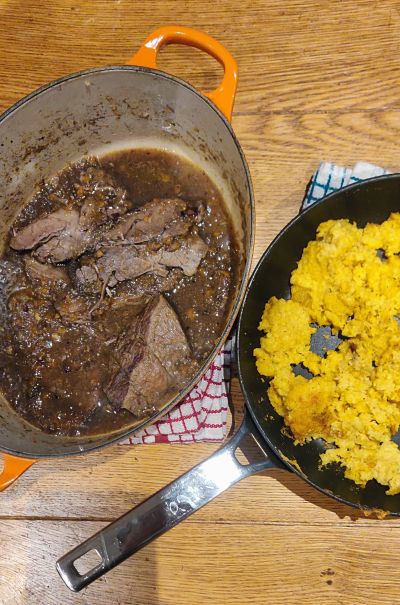 This is the sort of slow braised beef dish I grew up with – the occasional Sunday lunch fare, eaten with mounds of buttery polenta.
I prefer to cook a brasato in the oven, at low temperature, at least one day before I want to eat it. Pre-salting the meat is crucial, ideally 24 hours before cooking it.
In the Italian fashion, I use a solid piece of meat that I ask my butcher to tie with string into a solid shape, rather than cubes – this way there is less risk of overcooking the meat and the size allows for a prolonged period in the oven. The alchemy of time and gentle heating delivers rich, deep flavours.

Beef chuck is the cut of choice – I also tried with a combination of shin, cheek and tail but did not like the texture of the final dish, which was too removed from the Lombardy model I am accustomed to.
The spices used are traditional, bar the star anise, which is my unconventional addition and which I think works a treat with beef (in moderation).

This being a Northern Italian dish, I prefer to brown the meat in clarified butter (until the early decades of the 20th century, olive oil was seldom used in Lombard cooking).

Note: not a great pic.  The meat was meltingly tender. This picture was taken on the second time we had this dish, with some fried polenta.

Note to self: next time I want to try to use red wine only, adding it gradually during cooking

1.3 kg chuck, in one piece, tied with string into a neat solid shape, salted 24 hours in advance
with clarified butter, to brown the meat
100 g pancetta or unsmoked bacon, finely chopped
1 sage leaf , 1 bay leaf and 1 small sprig of rosemary
2 anchovy fillets preserved in oil
3 cloves, ground
half a teaspoon each of ground cinnamon and black pepper
a generous grating of nutmeg
a fragment of star anice (not much bigger than a rice grain)
200 ml full bodied red wine
2 carrots: 2 onions, 2 sticks of celery, 2 clove of garlic, finely sliced
200 ml beef stock

Use a heavy casserole with a lid, where the meat can fit snugly (a Le Creuset type).

Remove the meat from the fridge a couple of hours before you want to cook it, leaving it unwrapped on a rack. Blot with kitchen paper – you want it to be as dry as possible.
Pre-heat the oven to 140 C, static, medium rack.
On a medium heat, melt the butter and add the chopped pancetta and herbs, stirring occasionally. When it is hot, add the meat and gently but thoroughly brown it all over: this will take up to thirty minutes. Do not move it too much, every five minutes or so – a golden crust is what we’re after.

Towards the end of this step, add the anchovies and the spices. Move them around to dissolve the anchovies and to prevent the spices from burning.
Raise the heat and add the red wine, scraping the fond. When the wine has evaporated by half, add the vegetables and the stock. Salt lightly. When the liquid is simmering, cover with parchment paper, cover the pot with the lid and place in the oven.
Check every hour, turning the meat in the liquid. When the meat offers no resistance whatsoever to a skewer, it is done – about four hours.

Remove it from the oven, leave covered and cool completely. Fish out the chopped vegetables, pass them through a muli-legume and store in a separate container.
Refrigerate the beef and vegetables for 24 hours.
Remove the meat from its liquid and skim off as much fat as possible. Slice the beef.
Bring the juices to the boil and simmer until reduced to your liking. Turn the heat down to minimum, add the meat and let it warm up. Sometimes, for a thicker finish, I add a teaspoon of cornflour, made into a slurry with a little of the meat juices – add the slurry to the hot meat and thicken it on low heat.

Rest, covered, for ten minutes before serving. Polenta or mashed potato would be my ideal accompaniments.

My blog in Italian is: www.qbbq.wordpress.com My English blog is: www.italianhomecooking.co.uk View all posts by stefano arturi