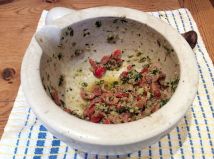 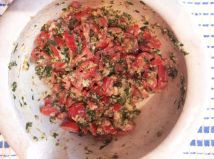 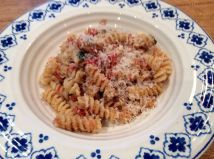 “Pesto alla trapanese” is a vibrant, intensely garlicky Sicilian pasta sauce made with almonds, tomatoes, garlic and basil – it is lesser know that its Ligurian basil and pine-nuts cousin, but equally glorious. It comes from Trapani, on the west coast of the island ,and it is generally eaten with busiate, a spiral-shaped, chewy, durum-wheat, egg-less fresh pasta (here, if you want to learn how to make it). Pasta con il pesto alla trapanese is also known as pasta cù l’agghia, pasta with garlic (in dialect): if you are after a delicate sauce, this is not for you. Researching for this recipe, I have realized there are endless variations: with more or less tomatoes (fresh or even sun-dried ones), with untoasted or toasted almonds, with or without pecorino cheese, with basil or with mint ecc…What never changes is the bold nature of this sauce.
I make it in my mortar, just because I love it but I am no purist and I am certain it is equally good if made in the food processor. In my version,the almonds are un-toasted but they have been plumped up in cold water: their milkiness softens the punch the garlic delivers; I use baby plum tomatoes, unskinned and chopped up with my mezzaluna, mainly because they are intensely sweet and with a nice firm texture at the moment; for four people I have used two fat cloves of young and juicy garlic, but many sources reccomend one should use one clove per person plus one.. for the teapot!
I have paired the pesto with fusilli and with bucatini and I have used both pecorino cheese and toasted breadcrumbs atop the dish – I cannot decide which version I prefer.

Start by pounding the garlic with a little salt. Add the almonds and pound them too.
Add the basil leaves and pound everything to a coarse paste, adding some olive oil to lubrificate and amalgamate everything; I have kept my pesto trapanese rather chunky, but it is a matter of taste – generally it is finer.
Add the tomatoes, stir well and add extra oil to taste.

Dress the pasta with the sauce, passing round either pecorino cheese or toasted breadcrumbs.